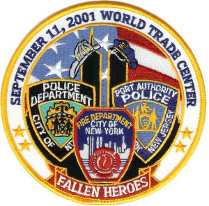 On September 11, 2001 the United States was changed forever. Thousands of innocent civilians were killed and many brave first responders lost their lives during the response. The Jaffrey Fire Department recognizes those brave men and women who paid the ultimate price that day. It is said that courage is not the absence of fear, but doing what must be done in spite of fear. Courageous is the best way to describe those first responders, they went running in when everyone else was running out. They did their duty in spite of their own personal risk, they fulfilled their mission and on this 16th anniversary of 9-11 we continue to honor that sacrifice.

The Jaffrey Fire Department is actively recruiting new members. If you are at least 18 years of age and live in Jaffrey, we want to talk to you.